The status of Washington and West Coast salmon and steelhead is not a crisis – it is a catastrophe. Our ocean ecosystems are changing dramatically — the S. Times reported that herring populations in Central and South Puget Sound have dropped by over 90% since 1975 — and the declines in marine fish are staggering, according to researchers (NBCI) and any fishermen you talk to. Approximately one third of West Coast salmon/steelhead stocks are extinct, and a third of the remaining populations are under ESA jursidction.

Statewide salmon/steelhead populations have been plummeting for decades (with a few exceptions) and only 10 percent of Puget Sound’s wild sea-run fish are left, according to the National Marine Fisheries Service, and dozens are listed under the Endangered Species Act, including the Stillaguamish steelhead and king salmon.

Mark Higgins’ Seatle Times 6/10/15 editorial
Steep slope logging threat to steelhead on private forest lands in Nisqualy River headwaters — if the DNR mandate was eliminated, revenue-generation pressure to “clear cut for kids” would disappear and steep slope harvests like those planned on the Nisqually would have been banned long ago on all DNR and private forests immediately and certainly after the Oso Slide.

Although many factors decimate fish stocks, habitat loss/ degradation due to logging is key. Fortunately, habitat improvement is perhaps the most efficient and effective way to restore out declining salmon/steelhead runs. (EG: it takes a lot longer to remove pollution from the Sound, dams from the Columbia and Snake, or get Marine Mammal Protection Act waivers to address seal/sea lion predation). Habitat restoration can give us time to strengthen our stronghold runs and rejuvenate our threatened rivers systems and runs.

The Disappearance of Our King Salmon Runs

This summer, there will be no king fishery in central Puget Sound for first time in years. Chinook numbers were down 25% from last year so they closed it down. This is a major loss of a century old tradition and may be a harbinger of things to come as global warming sets in- concerns about pre-spawning mortality because of drought, low water levels and higher water temperatures contributed to the tight restrictions.

A Greener, Mandate-Free DNR Could Help Mitigate These Problems Instantly

If the DNR went to a 90 year harvest rotation instead of the current 35, and if they increased creek/stream/river buffers substantially, and minimized road building and overall harvest levels were dropped substantially, think of how quickly our well shaded waterways would cool, clean, and nurture smolts and adults alike!!!!

As the salmon go, so go the orca 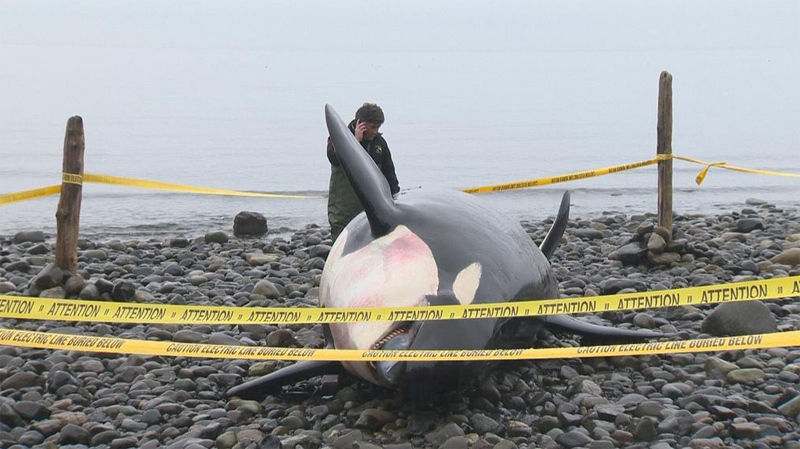 This -\pregnant orca was starving and carrying a fetus. Photo: CTV News Vancouver

Birdlife: Marbled Murrelet populations plummeted by 30% in the last decade

Critical habitat is being lost to DNR logging on trust lands far too often. See the WFLC website for a summary of some of these cases as well as the Audubon Society’s.

Tell WA’s Commissioner Goldmark to protect our forests (and the rare birds that live there). Visit: Washington Environmental Council

Note: None of the principles or practices below are new — they are rarely used/emphasized in our mandate driven, revenue focused management plans — That “TIMBER” is listed first in TFW says it all.

“FWT” Fundamental Principles for Forestry in the Climate Change Era