Ending the DNR Mandate Will Help Limit the Effects of Climate Change in E. and W. Washington

Trees are the best defense against climate change: A wisely managed, conservation driven, salmon centered forestry plan provides the best bulwark against the ravages of climate change – see below:

Note: None of the principles or practices below are new — they are just rarely used/emphasized in our mandate driven, revenue focused management plans — That “TIMBER” is listed first in TFW says it all.

Some groups are already addressing climate change’s impacts: for example, Forest and Water Climate Adaptation: A Plan for the Nisqually Watershed. Yet a DNR freed of fiduciary pressure to maximize tree harvests for schools would make such efforts far more widespread on the states 12.1% of state forestlands PLUS on Washington’s 35.6% privately held forestlands. (12.1% + %35.6% = 47.7%)

“Multiplier effect”: because private timber lands must follow DNR rules, almost half (47.7%) of our state forestlands would suddenly be managed in a FAR more progressive fish and wildlife friendly manner than they are currently. This “multiplier effect” is perhaps the single best reason to drop the DNR mandate.

Young vigorously growing forests can consume over three times more water than old forests according to field research report from the EPA on the Nisqually River (Moore et al. 2004).

Summary/Review of: The benefits of the “New FWT Forestry Fundamentals” in the era of climate change 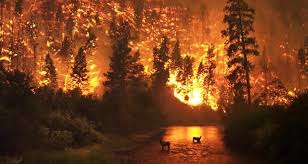 “Part of the solution to all of the forest fire (sic) problems … is to restore the biodiversity and resilience of ecosystems so that they can once again tolerate fire … we must ensure that when forests burn (as they inevitably will) the fires will be of low enough intensity to cleanse the forest floor without roaring into the tree crowns and destroying everything in sight.” From Forest Fires: A Reference Handbook, by Philip N. Omi